Use natural tools to develop a “fit for purpose” landscape

THE best tool to develop a fit for purpose grazing landscape was the animal for which the pasture was intended, according to renowned regenerative grazing expert Dick Richardson.

Speaking at a workshop designed to coach graziers in pasture management and grazing planning, Mr Richardson said nature provided the tools to “inoculate” land with desirable pasture, and those tools were the same animals that were going to be grazed there.

The technique could be used to regenerate paddocks suffering infestation from weeds or less desirable plants such as currant bush.

Mr Richardson said modern methods of rotational grazing could often lead to repetitive grazing patterns which, once entrenched year after year, could lead to a decline in production and ecology.

He said land managers could use livestock in a planned manner to disrupt the pattern and rehabilitate the soil and pasture, using a natural grazing approach he developed in South Africa, the United States, Britain and Australia,

Undesirable forbs and grasses could be discouraged by repeated intensive grazing, particularly during the growing season, followed by appropriate rest strategies.  This also also helps to manage tree grass balance.

Mr Richardson said it was possible to change the character of a paddock during one growing season with just two or three intensive grazing periods.

He said it was important to understand the biological impact of grazing and the regenerative nature of pasture to continually plan ahead to achieve the best biological outcome according to the conditions provided by nature each year, even when extraordinary climate events occurred.

“Nothing happens that hasn’t happened in nature before,” he said.

Host Gerard Lyons said in the four years since he and wife Elizabeth had moved to Four Mile from their Mount Surprise property, they had seen the best and worst of the climate.

He said when, and how, rain fell was more important to a grazier than how much.

Mr Lyons said one of his best years as a grazier was at Mt Surprise when only three inches (75mm) of rain fell for the entire year.

“The rain came in May, just at the right time and it set us up for the year,” he said.

He said he believed the difference between a good and a bad year was just six weeks… and it all depended on when and how the rain fell, particularly follow-up rain later in the season. 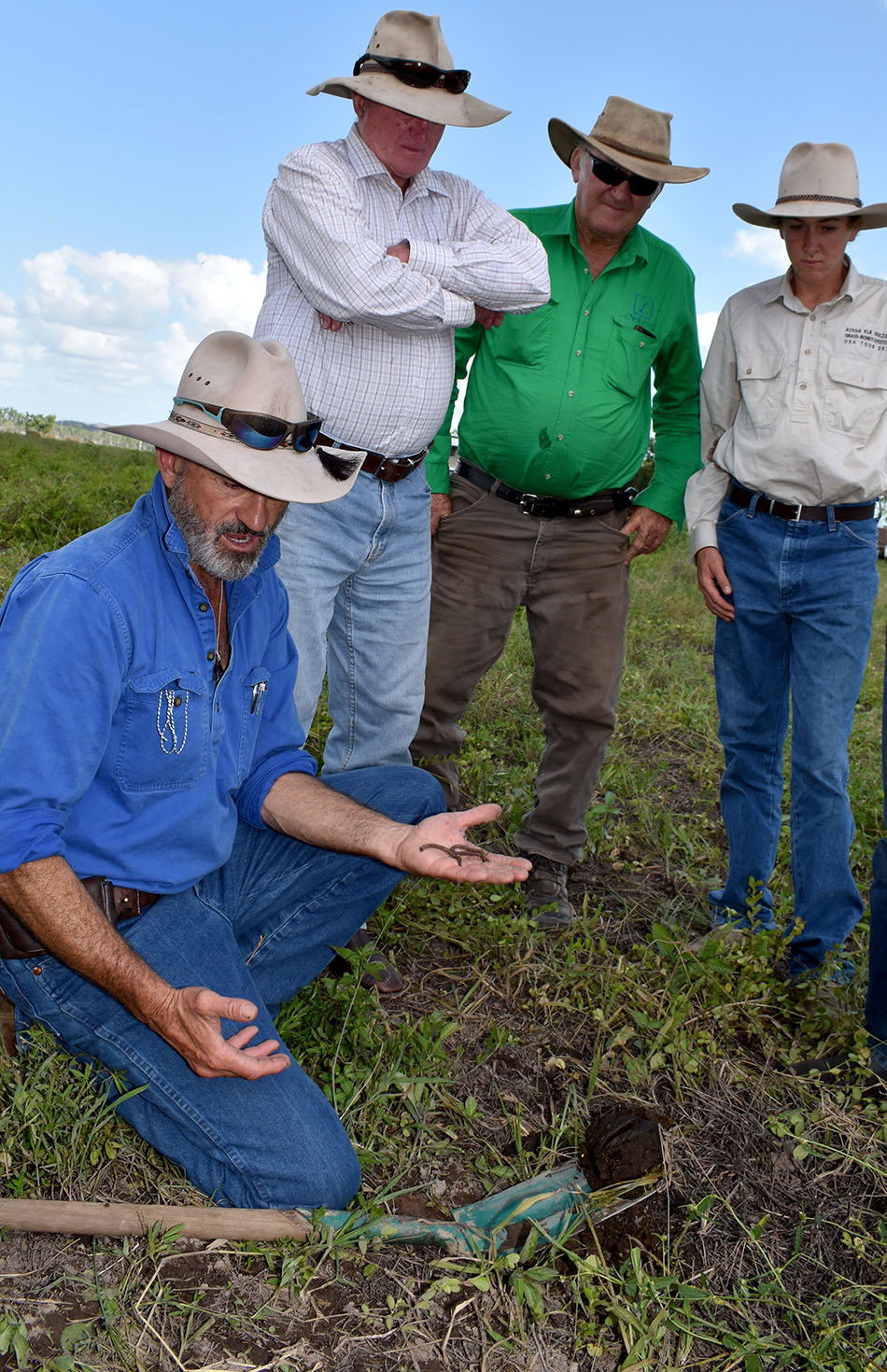 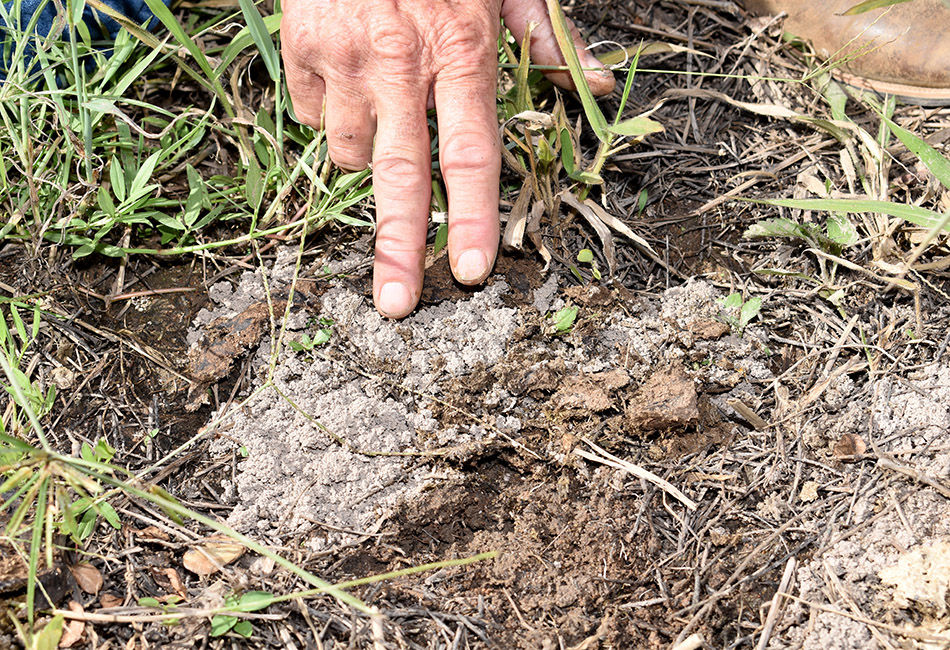 Dick Richardson admires the work of the dung beetle at Four Mile Station, pointing out a cow pat completely broken down and returned to the soil. 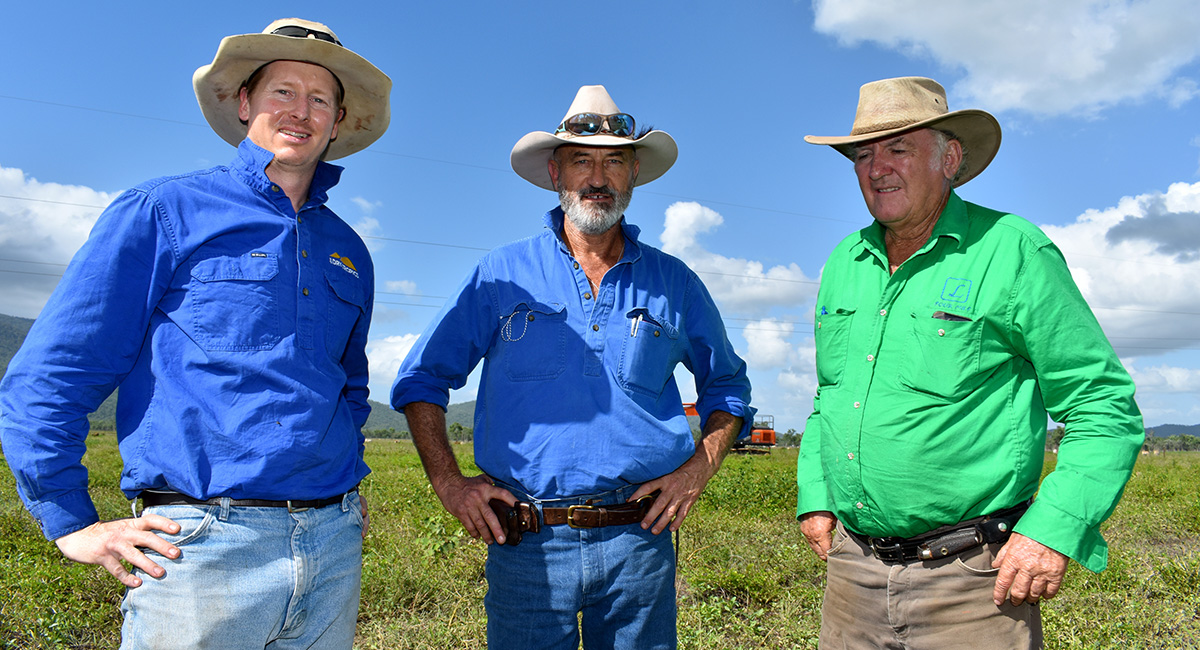