The aim is to turn problem weeds into a valuable on-farm resource, through cost-effective means, while controlling weeds in waterways. 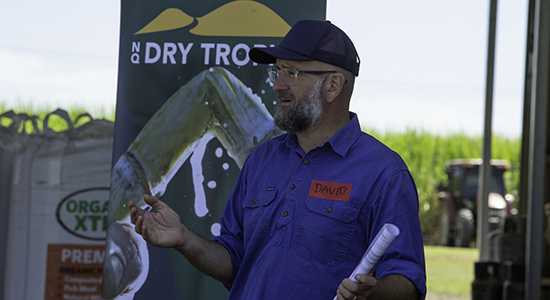 Respected agro-ecologist David Hardwick of Soil Land Food, has been contracted to guide the growers through the composting process.

“My role is to show farmers how to make compost on-farm using low-cost, local resources that can be used in their soil for production benefits and soil health benefits,” Mr Hardwick said.

“Farmers are hesitant to use compost because of the price, and the cost of freight is an additional barrier.

“The approach being trialed is a fermentation compost, also known as a minimum or no-turn compost.

“Fermentation is where you mix your ingredients and add a bacterial inoculum to the compost heap, and then cover it to allow it to compost in a low-oxygen environment.

“It’s different from a normal turned compost because it uses a lot less resources, time, water and machinery to achieve a really good quality compost.

“Compost needs two main ingredients, called feedstock, carbon and nitrogen. The wood mulch is the carbon source and the water weeds are the nitrogen source.”

NQ Dry Tropics Waterways, Wetlands and Coasts Team Leader Scott Fry said the trial would not have been possible without funding support from the Queensland Governments’ Natural Resource Investment Program, and in-kind donations from Burdekin Shire Council and Lower Burdekin Water. They have provided the feedstock for the project.

“Council has donated mulch from its waste transfer facility and has provided access to aquatic weeds from the local creek systems,” Mr Fry said.

“Lower Burdekin Water is donating excavator time to remove the weeds from the creeks, and loading it onto trucks to be taken to participating farms.”

Growers have also made their own microbial inoculant for the compost.

“The microbes do all the hard work breaking down the feedstock and converting it into a high grade compost.

“When forming the compost piles, we wet them to about 60 per cent moisture and the microbes are diluted and spread through the piles.”

The composting process will take about five months, and will be trialed on a range of crops to improve soil structure to help the sandier soils hold water for longer.

Third-generation farmer Gary Spotswood is participating in the trial. After experimenting with compost for a few years he said he was keen to trial a static compost pile.

“The idea of utilising everything that you have in your backyard such as water hyacinth and other aquatic weeds, is not only practical in terms of producing your own compost, but potentially will also be cost effective,” Mr Spotswood said.

“Being organic farmers, traceability is critical. We need to justify what product we use, and how and when we use it.

“Using a locally sourced natural resource to convert into a high quality compost is appealing. It means potentially reducing our use of conventional organic fertilisers and also reducing costs.

“David Hardwick’s input has been valuable. He’s been great in explaining how to manage the composting process in accordance with Australian composting standards, and the tests we can do to verify our organic standards.”

Agro-ecologist David Hardwick explains the process to a group of growers in the Burdekin.