Basalt wall a threat to highway and local ecology

THE Commonwealth and Queensland governments’ Disaster Recovery Funding Arrangements (DRFA) will help to prevent expensive repairs by averting a disastrous landscape change that could threaten a section of the Lynd Highway.

Funding worth $650,000 will support NQ Dry Tropics to fix a known trouble spot – a hole in the basalt wall on Gainsford Station north of Charters Towers – that deteriorated dramatically in last  year’s unprecedented flooding and now threatens a section of highway, including a two-lane bridge.

Reconnaissance commissioned by NQ Dry Tropics and undertaken by environmental engineering firm Alluvium uncovered the potential for a catastrophic landscape change there that could also threaten an entire wetland ecology.

Soil conservation consultant John Day, who inspected the site with NQ Dry Tropics’ Soil Conservation Officer Neil Cupples, said there was now less than 30 centimetres of the wall between the head of the gully and the sill of Lake Eumara on Allingham Creek (Fletcher Creek downstream).

Mr Day said although the gully had been eroding for decades, the NQ monsoon event during February last year had resulted in “significant movement” in the affected area. 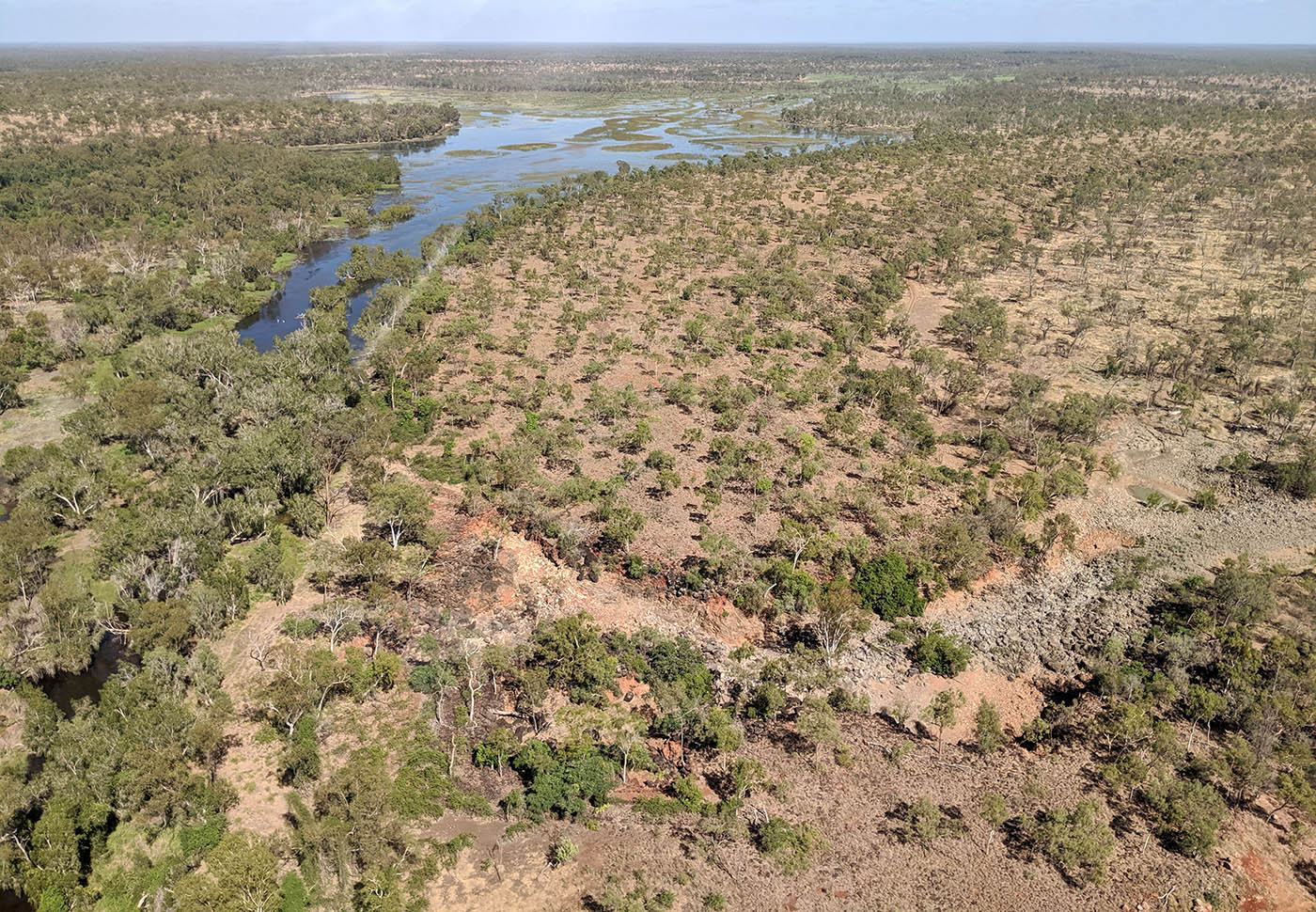 Lake Eumara, fed by Allingham Creek with the gully heading east away from the present course of the water flow. 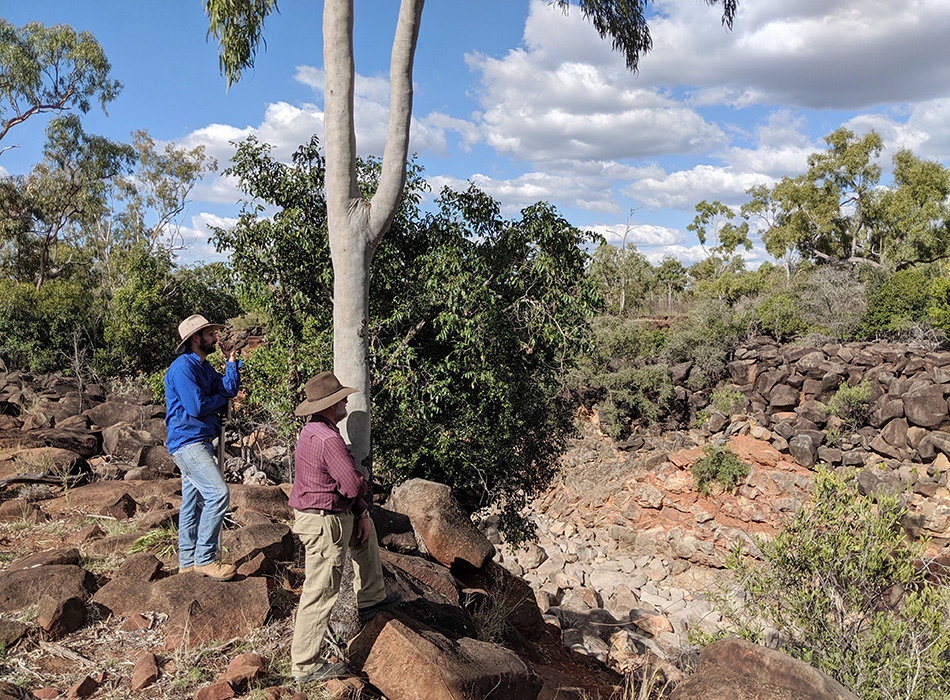 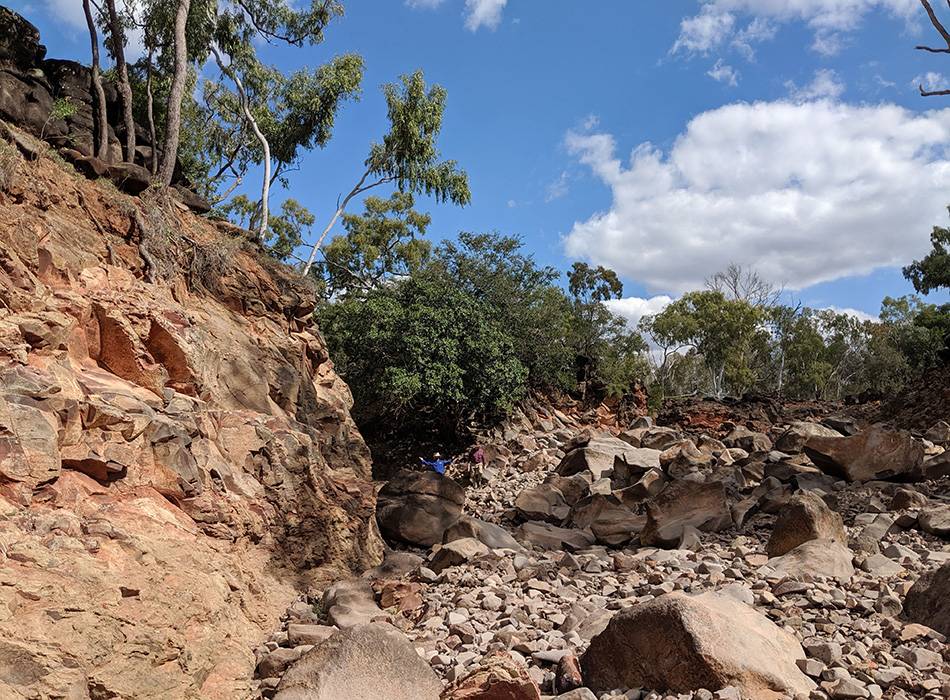 Neil Cupples on the gully floor demonstrating the scale of the gully. 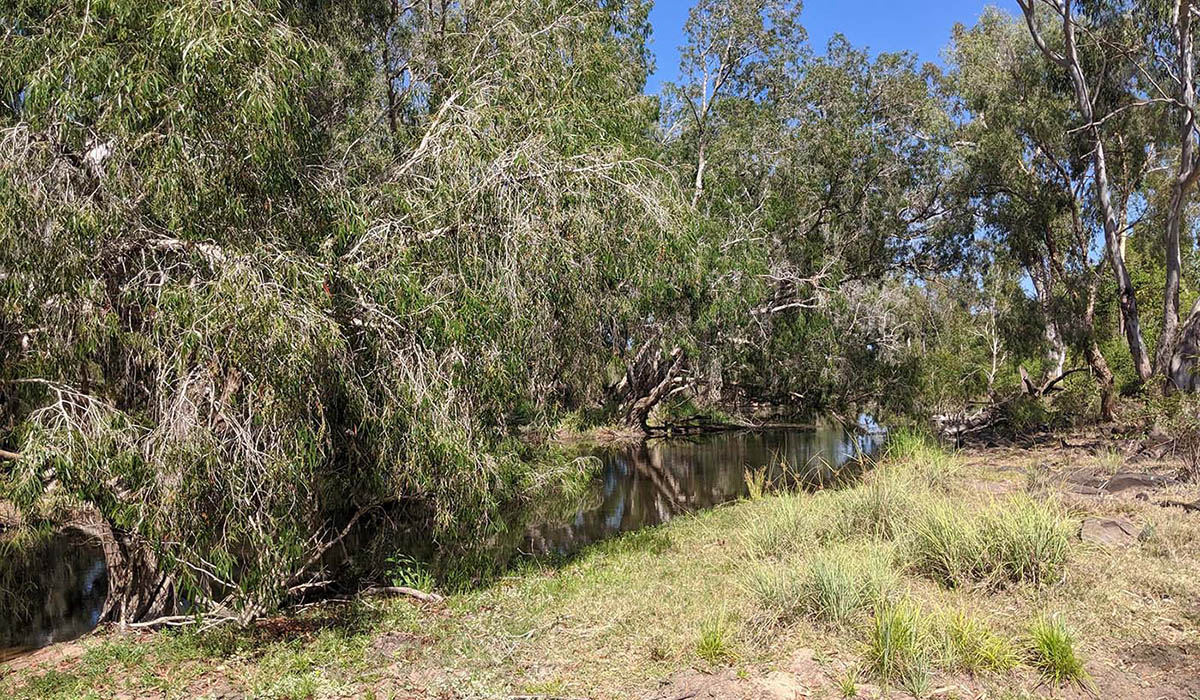 Taken from the highest point of the wall between the end of the lake and the head of the gully. This is the 30cm high hump of land preventing the flood-time watercourse from becoming permanent.

The gully is eating into the Great Basalt Wall at a place where it acts as a dam, stoppering the end of the lake.

The Great Basalt Wall is part of a basalt flow in the region more than 13,000 years ago and about 30 per cent of it is in a National Park.

It is an ecologically-sensitive area storing a significant volume of water in lakes, wetlands and groundwater, that allows streams in the surrounding region to flow all year round.

Mr Day said, given average rainfall, the last barrier between the lake and Allingham Creek could break away in 10 to 15 years.

“Once that does break away, it will start chewing into the lake pretty quickly,” he said.

When that happened, the upstream wetland would also be drained, dramatically altering the ecology of the whole area.

The funding under the DRFA has been granted in response to the landscape damage caused by the monsoon trough at Townsville in February.

It will be administered by the Queensland Government, responding to submissions from Natural Resource Management (NRM) groups and local authorities.

Most of the survey work was done by helicopter with NQ Dry Tropics Grazing Field Officer Josh Nicholls guiding Alluvium consultants to sites where damage was most likely to occur.

During two days of flying, the only site where they asked the pilot to land was at the gully breach in the basalt wall on Gainsford Station, about 50km north of Charters Towers.

The gully is a long-standing problem on the property – remnants of a diversion wall built in the 1970s are still evident – but it has suddenly become a problem needing immediate attention.

The gully system is growing at an alarming rate – 30m to 60m per year in the worst-affected places.

The flooding event caused it to grow even more rapidly, and the hole in the wall has been enlarged by about 10m.

Mr Nicholls said the extent of recent damage was easy to see because of the different colouring in the exposed rocks.

Rocks that had been exposed for a year or more had weathered, and turned grey.

“The red rocks in the photographs are those that have recently been unearthed,” he said.

“That’s the erosion that happened in the past year.”

Adding to the problem was the risk that massive sediment loads, presently held back by the basalt wall, could be released if the gully was to further erode and permanently redirect Allingham Creek.

If that happened, the Lynd Highway, including a two-lane bridge, would also be at risk.

The Gainsford Station homestead may also be threatened, particularly during high water-flow events.

NRM Implementation Manager Peter Gibson said the reconnaissance team saw so much devastation, they caught themselves becoming inured to it.

Eventually they narrowed the problem areas down to nine sites of concern.

“Of those, the Gainsford Station gully is definitely the top priority, and we will make further inspections to prioritise the other trouble spots,” Mr Gibson said.

He said where it was possible, NQ Dry Tropics would look for opportunities at each site to treat the cause of the problem, rather than treating recurring symptoms.

“We will make the site more resilient and better able to withstand extreme weather events in the future,” Mr Gibson said.

Under the DRFA guidelines, funded projects will have to be completed by June 2021.

The project is jointly funded by the Commonwealth and Queensland governments under the Disaster Recovery Funding Arrangements through the exceptional circumstances Category D environmental package. 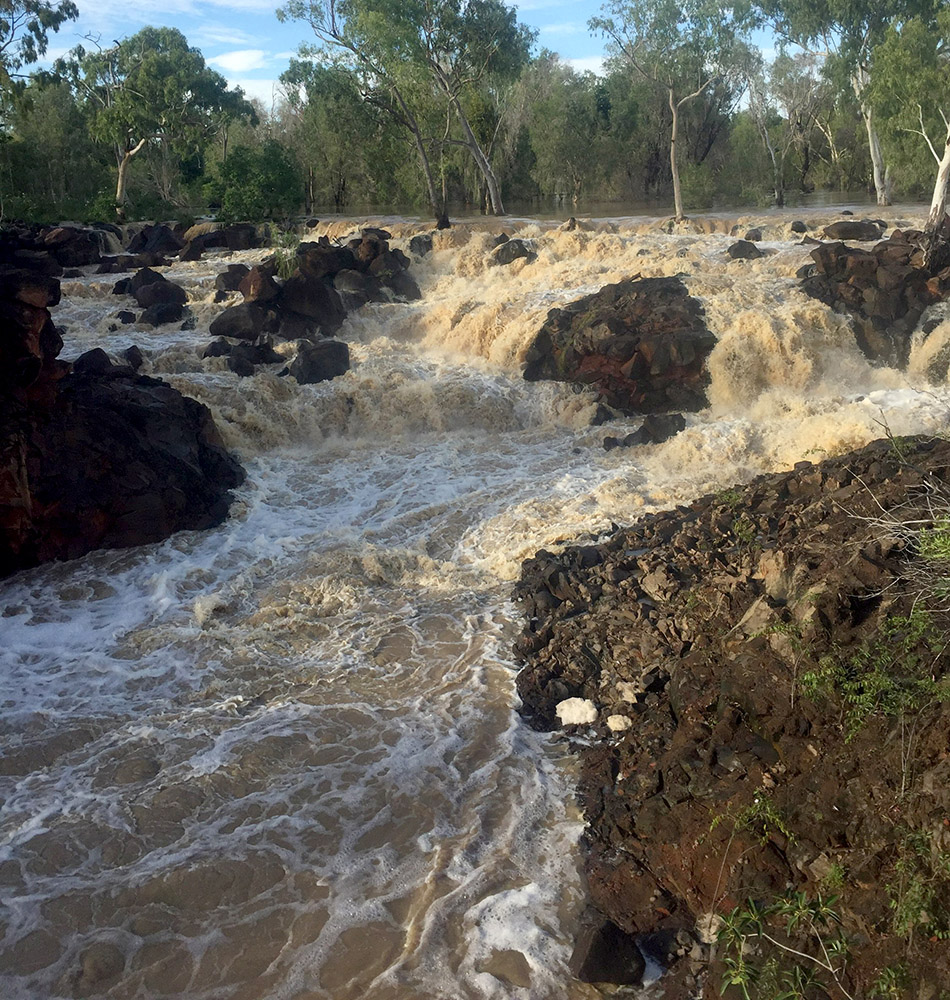 This photograph of the breach in the basalt wall was taken 10 days after rain stopped falling in the February monsoon event. 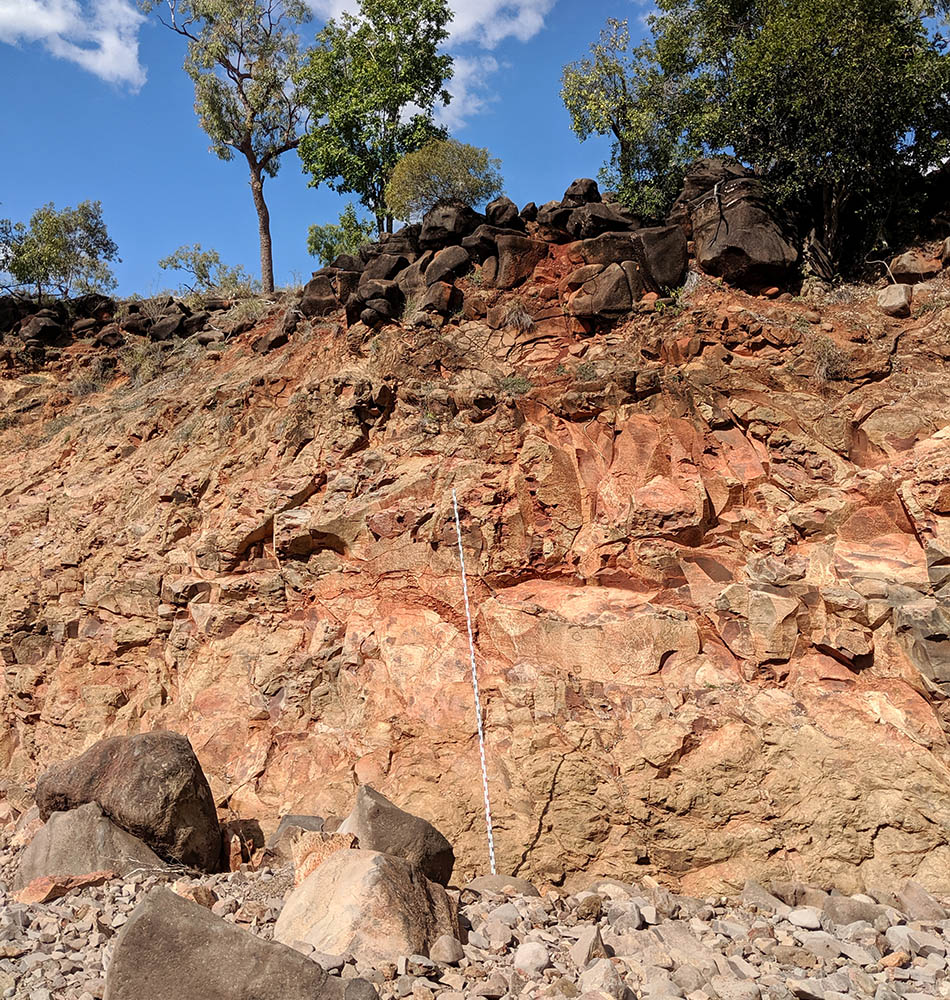 That is a 6m high surveyor’s staff leaning against the side of the gully.