Burdekin cane farmers are being urged to take part in a trial that will use Barramundi as a weapon in the fight against invasive Tilapia.

Tilapia have colonised farm recycling pits across the Lower Burdekin causing erosion, however, recent evidence from the Mackay area indicates that Barramundi can keep populations in check by feeding on juveniles. 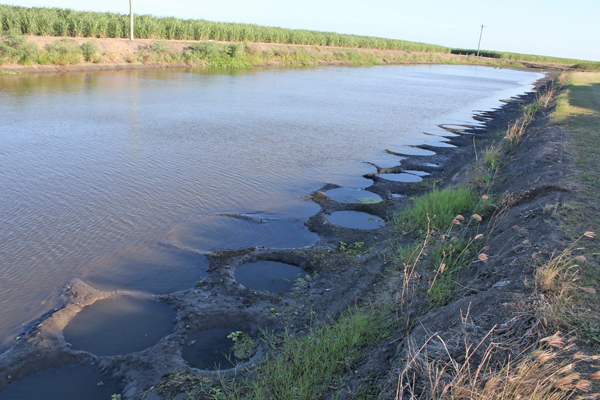 “Known as the pigs of the waterways, Tilapia make nests in the shallow edges of creeks and recycling pits and this can cause banks to slump and erode,” Mr Fry said.

“We plan to stock recycling pits with Barramundi to reduce damage to the pits and help control Tilapia population across the floodplain. We know we’ll never eradicate them from our waterways, but we hope that this program will make a big difference.

“Our Systems Repair project encourages farmers to adopt best practice by completely emptying recycling pits on each irrigation cycle.  However, if there are cases where they can’t be fully drained, stocking with Barramundi could be a good way to manage Tilapia,” he said.

BFRA secretary Allan Griggs said previous stocking efforts had seen recycling pits teeming with thousands of juvenile Tilapia reduced to a small number by the end of the dry season.

“The Barras gorge themselves on the Tilapia and grow extremely fast. It’s one way of managing invasive species in a connected landscape,” Mr Griggs said.

“An added benefit is once Barras grow to an adult size, they can then return to the ocean to breed. Barra fingerling numbers are limited so we’re managing the project on a first come first serve basis,” he said.

Mr Fry added that Tilapia was introduced into Australia in the 1970s as an ornamental fish, and had successfully invaded and dominated many aquatic habitats due to its highly efficient reproductive strategy, simple food requirements, and ability to live in a variety of conditions.

“They rapidly outnumber native fish and can also survive a range of environmental conditions that native fish find difficult to survive in,’’ Mr Fry said.

“Females carry juveniles and eggs in their mouths, and these can survive for a considerable time after the adult dies. This means new incursions can occur when live or dead fish are released into a waterway.

“This is why when caught, Tilapia must be humanely destroyed immediately and disposed of by burying a suitable distance from the waterway where it was caught, or alternatively, placed in a rubbish bin,” he said.

Before releasing the fingerlings, the pits will be surveyed for fish by James Cook University’s NESP (Tropical Water Quality Hub) TropWATER team to identify fish species and size of the Tilapia.  BFRA will then know what sized barramundi to stock to ‘match the hatch’.

The recycling pits will be stocked by the end of October 2017 and again in May 2018, following the wet season.

Cane farmers who have Tilapia and are interested in stocking recycling pits with Barramundi can contact Allan Griggs on 0428 832 880 or Paul Godfrey from NQ Dry Tropics on 0414 750 115.