Plastic shopping bags, drinks bottles, crab pots, bicycle tyres and a bollard were just some of the items that filled more than 20 large sacks of rubbish on Saturday during a community clean up of popular fishing spot Aplins Weir.

More than thirty dedicated locals braved the hot weather to join the effort, put on by NQ Dry Tropics as part of North Australia’s biggest rubbish removal campaign: the Great Northern Clean Up. Participants cleaned up the banks and also the river using kayaks that were provided free on the day.

NQ Dry Tropics Project Officer Thijs Krugers, who organised the event, said it was a great way for locals to have fun while helping to  protect important fish and bird habitat:

“It’s currently spawning season for Barramundi, so they are especially vulnerable to the effects of poor water quality, which is made worse by rubbish in the river and on the banks. This event gave the community an opportunity to help barra and other fish,  as well as birds, and also learn how to get further involved by volunteering with local community groups.

“We were happy to see lots of kids and families at the event, including from the scouts. One family even brought their dog on a kayak to join in the effort. By far the most common item we found was plastic shopping bags, so any measures to limit their use would make a big difference”, he said. 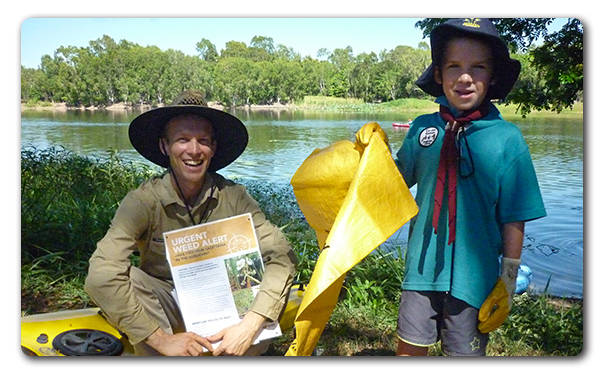 NQ Dry Tropics Waterways, Wetlands and Coasts Programme Coordinator, Laura Dunstan, said that events such as these were part of a wider effort to look after the natural landscapes in North Australia:

“Since the Great Northern Clean Up campaign started in 2009, a total of 26,398 volunteers have removed about 1,583 tonnes of rubbish from 717 sites north of the Tropic of Capricorn. Last year, 2,530 volunteers removed an estimated 196 tonnes of rubbish from 81 registered sites across northern Western Australia, the Northern Territory and far northern Queensland,” she said.

“I’d like to thank the Aurizon Community Giving Fund and the Australian Government’s National Landcare Programme for supporting the event. Thanks also to Townsville Sportfishing Club, Outer Limits Adventure Fitness, River-Sea Kayaking, and Townsville City Council for getting involved”, she said.