Electrofishing surveys taking place around Sheepstation Creek over the next few weeks will shine a light on the health of juvenile fish stocks in the area.

Since 2013 NQ Dry Tropics has worked with Burdekin Shire Council, Lower Burdekin Water and local landowners to improve wetland function as part of the Australian Government-funded Systems Repair project. This has involved measures to improve fish habitat, such as constructing fishways, removing weeds, and reducing the flow of excess irrigation water that can help weeds proliferate.

NQ Dry Tropics’ Systems Repair Project Manager Scott Fry explained that Sheepstation Creek, in the Burdekin Delta,  flows into the Great Barrier Reef Lagoon, and is an important juvenile habitat for many native fish species including barra and mangrove jack.

“Many of these species migrate between the ocean and wetlands to complete their lifecycles, and they thrive in open water with contains high oxygen levels”, Mr Fry said.

“Large infestations of aquatic weeds use up this oxygen, and also attract exotic fish such as Tilapia, Three Spot Gourami and Mosquitofish, which can survive in lower oxygen levels. So healthier creeks with less weeds give natives a better chance of survival and supports our commercial and recreational fishing industries.

“We will be working with our colleagues at TropWATER to monitor 11 of Sheepstation Creek’s deep water lagoons to determine whether ongoing weed control has supported an increase in fish species in the system.

“We will compare the results with surveys conducted in 2009 after we had removed a major weed infestation that was previously covering the creek”, Mr Fry said. 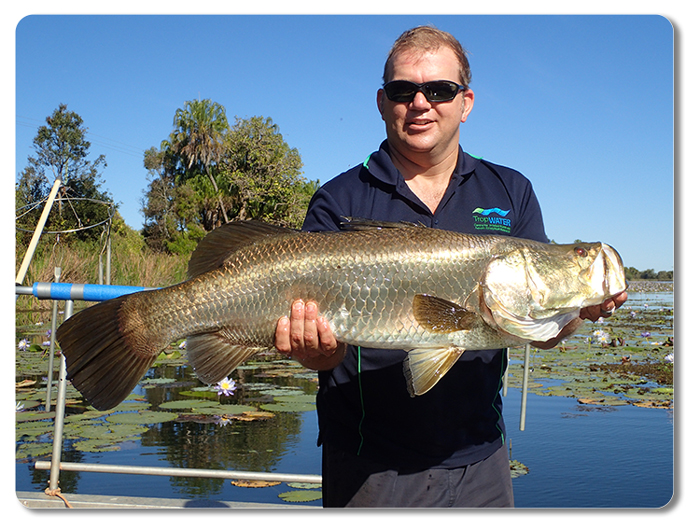 Dr Nathan Waltham, from TropWATER, with a barra from a previous electrofishing survey.

TropWATER, James Cook University’s tropical aquatic research group, will be conducting the survey using its  electrofishing boat, which captures fish by delivering an electrical pulse into the water that extends out to approximately two metres either side of the boat. This temporarily stuns the fish, which are then netted and measured before being released back into the creek unharmed.

This survey is part of a larger wetland system repair science evaluation project funded through the National Environment Science Program (NESP) Tropical Water Quality Hub, led by TropWATER’s Dr Nathan Waltham.  Results of the surveys will be available on completion.

For more information about the Systems Repair project or the electrofishing survey, please contact Scott Fry on scott.fry@nqdrytropics.com.au or call 0478 119 499.