Dramatic before and after photos demonstrate how a severely eroded gully has been transformed within two years thanks to an ultra high-density grazing technique. The gully, on Barry and Leanne O’Sullivan’s 23,000ha Glenalpine grazing property near Bowen, is now barely visible under dense pasture.

And the 300ha paddock in which it is located is also now unrecognisable, with the return of 15 native species on a landscape that had been dominated by Indian Couch.

Crucially,  it advocates practical, natural, cost-effective and innovative approaches to managing and restoring land. Barry and Leanne felt Holistic Management suited their ideology, and gave them an opportunity to sustainably manage their property, while maintaining their quality of life.

Barry said that the gully was on fragile but fertile black soil, and had been moving at least a metre per year despite consistently high groundcover. 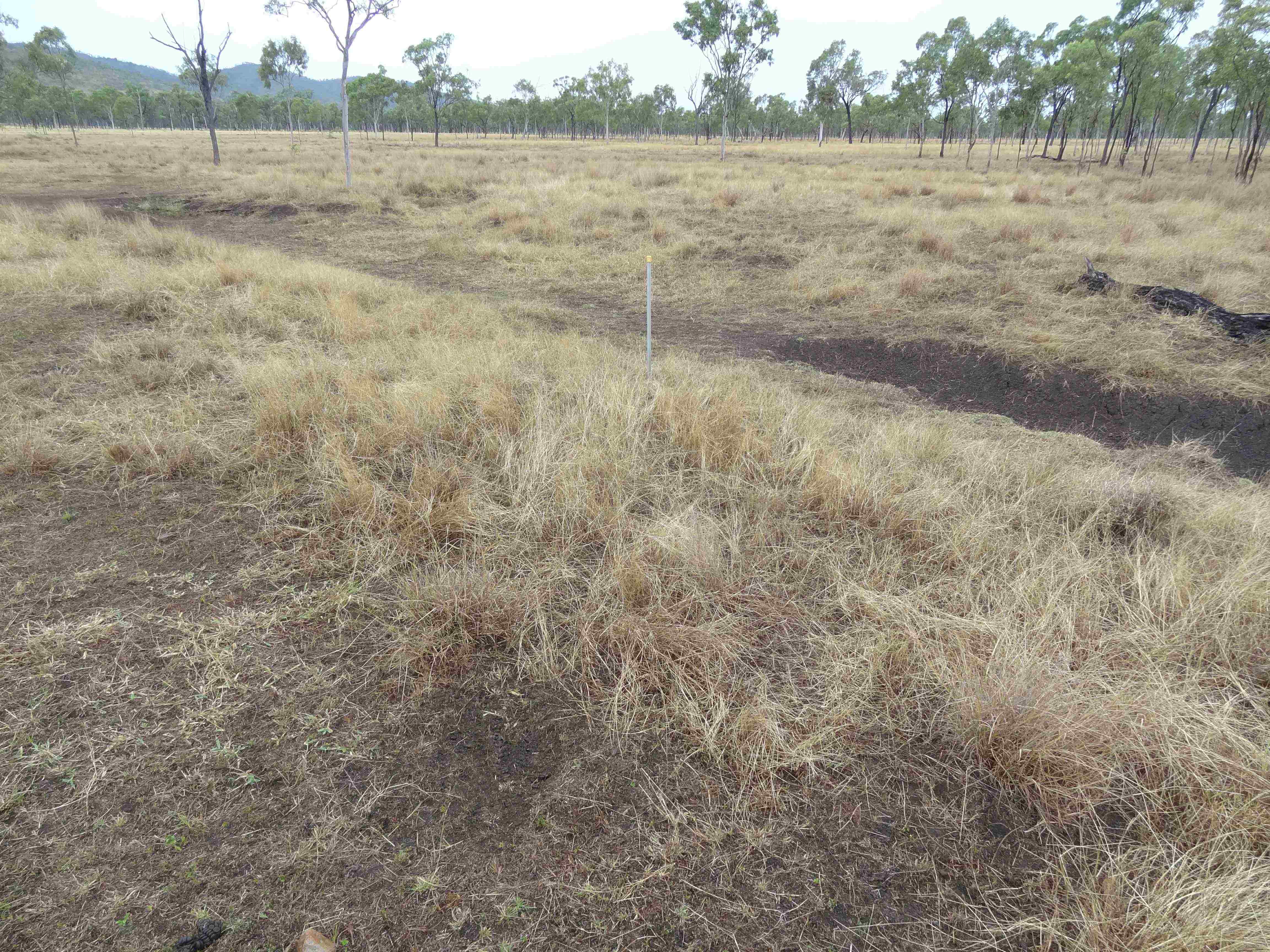 Photo: May 2014 End of below average wet season pre-trial monitoring photo. This paddock received a full wet season spell and a very low stocking for eight days. Despite moderate to high groundcover, Barry and Leanne had observed continuing advancement of the gully head.

“With Holistic Management, you go through a series of decisions, to try and achieve certain results. And with this process, we decided that we wanted to try and fix this gully head and stop it eroding any more,” he said.

Barry and Leanne implemented holistically planned, ultra high-density grazing by setting up daily temporary paddocks within the larger paddock. They used an electric fencing system mounted on a quad bike that was quick and easy to set up and dismantle. The cattle accessed water through a narrow laneway.

They grazed a single mob of 1200 head over a six-week period at the end of the 2014 dry season across the 300ha trial area. The cattle responded well to the daily movement and, with a molasses mix as supplement, performed well from a production perspective.

“To treat the gully, we decided to camp some cattle up on the head for  six nights in a 25x25m night pen… and then wait for the wet season to come and grow some feed on it,” said Barry.

“Our water point is about a kilometre away. As the cattle were coming in for their last drink of water in the afternoon, we had a small poly electric fence laneway coming up and into the night pen and they were packed tight. They were content just milling around, they were full and were let out at daylight,” he  said.

They treated the gully system by locking the mob onto the gully until the headcut and the sides were thoroughly broken down and a layer of manure and urine slurry about an inch thick, was spread across the gully system. This is known as ‘Biological Carpeting’. They removed the cattle prior to the start of the 2014/5 wet season, which began with showers in mid-December and good rainfall through January. Despite being in a 720mm rainfall region, this area had only received around 350 mm per year over these four preceding seasons.

Barry said: “The purpose of the slurry in the gully is to feed the microbes in the soil and grow fungi that binds the soil together, which it did. And then in turn you’re keeping the soil together and so when it rains it’s not eroding as bad, and because of the microbes and fungi and all that life, you’re growing a lot more cover to stop the water running off and the roots grow deeper.”

As part of this trial, NQ Dry Tropics staff monitored pasture health by conducting three 100m transects. They used quadrats to measure the density and frequency of pasture species, and pasture yield at the end of the wet season. They assessed residual pasture at the end of the dry season.

Barry and Leanne have seen an extraordinary pasture response to their holistically planned, ultra high-density grazing trial, with a massive germination and growth of a range of grass and legume species. 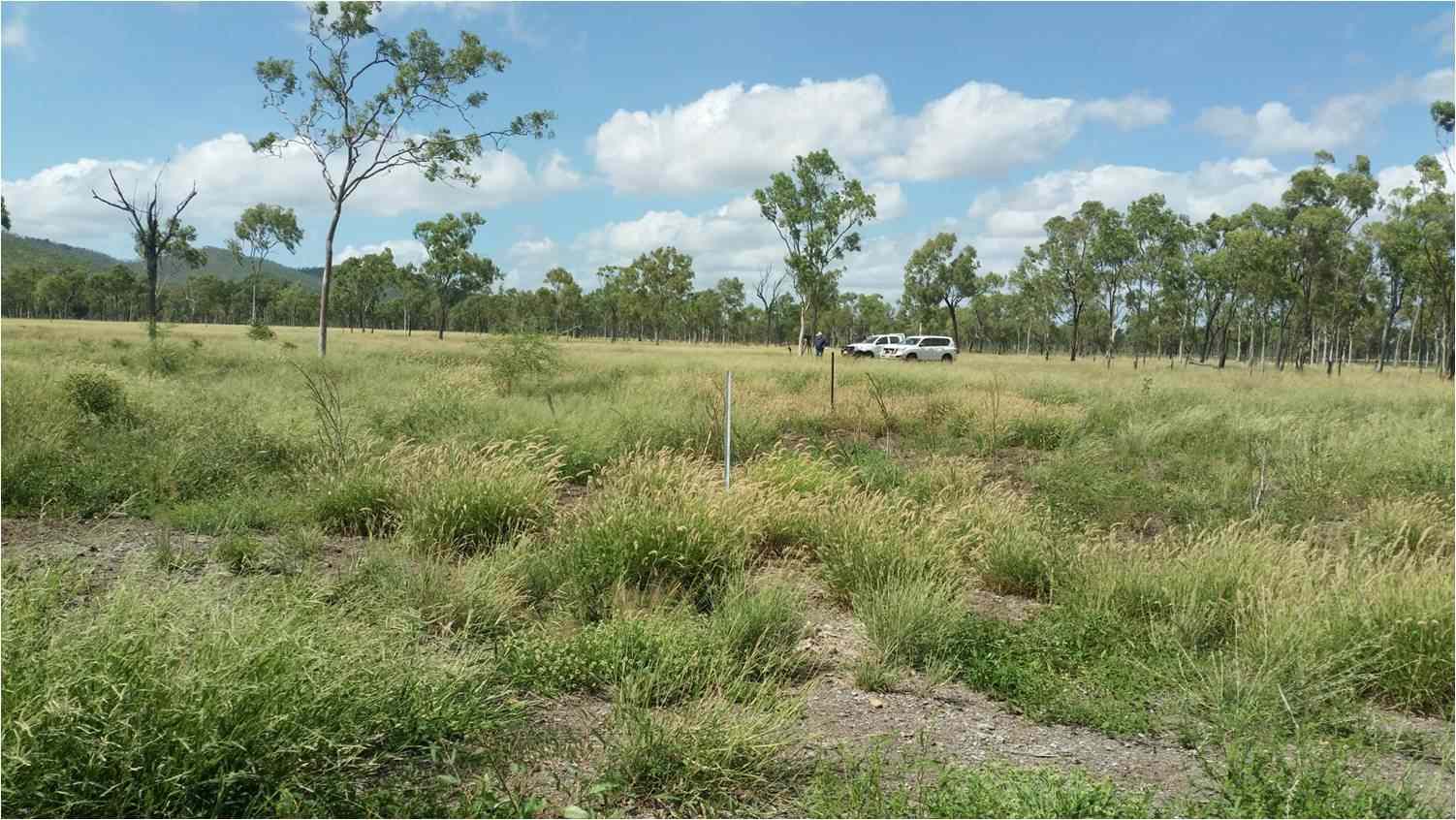 “The pasture growth in the high-density grazed areas is phenomenal. I could not have imagined that pasture would respond so well,” Barry said.

“On rested country next to the treated paddock the grass recovered ok from the dry season, but it doesn’t compare to where the ultra high-density grazing occurred. My estimate is that some areas have produced five to six times the biomass compared to the untreated paddocks,” he said.

Monitoring carried out by NQ Dry Tropics Staff has seen a significant rise in pasture diversity and density over the marked transects, with three species being located in the baseline data and 17 species in the first year post-treatment. Fifteen species were recorded the second year post- treatment, as two annual species were not present at the end of wet monitoring.

Standing biomass yield has increased by 728 per cent in the first year and 840 per cent in the second year, when compared to a conventionally managed control site on similar soils and a similar gully.

Barry added: “Quite amazingly, we didn’t put any seed out here at all, so the diversity in plant species went from three species up to around 17. The cattle impact, the manure and urine has just triggered something in the soil and allowed all of this to happen.“