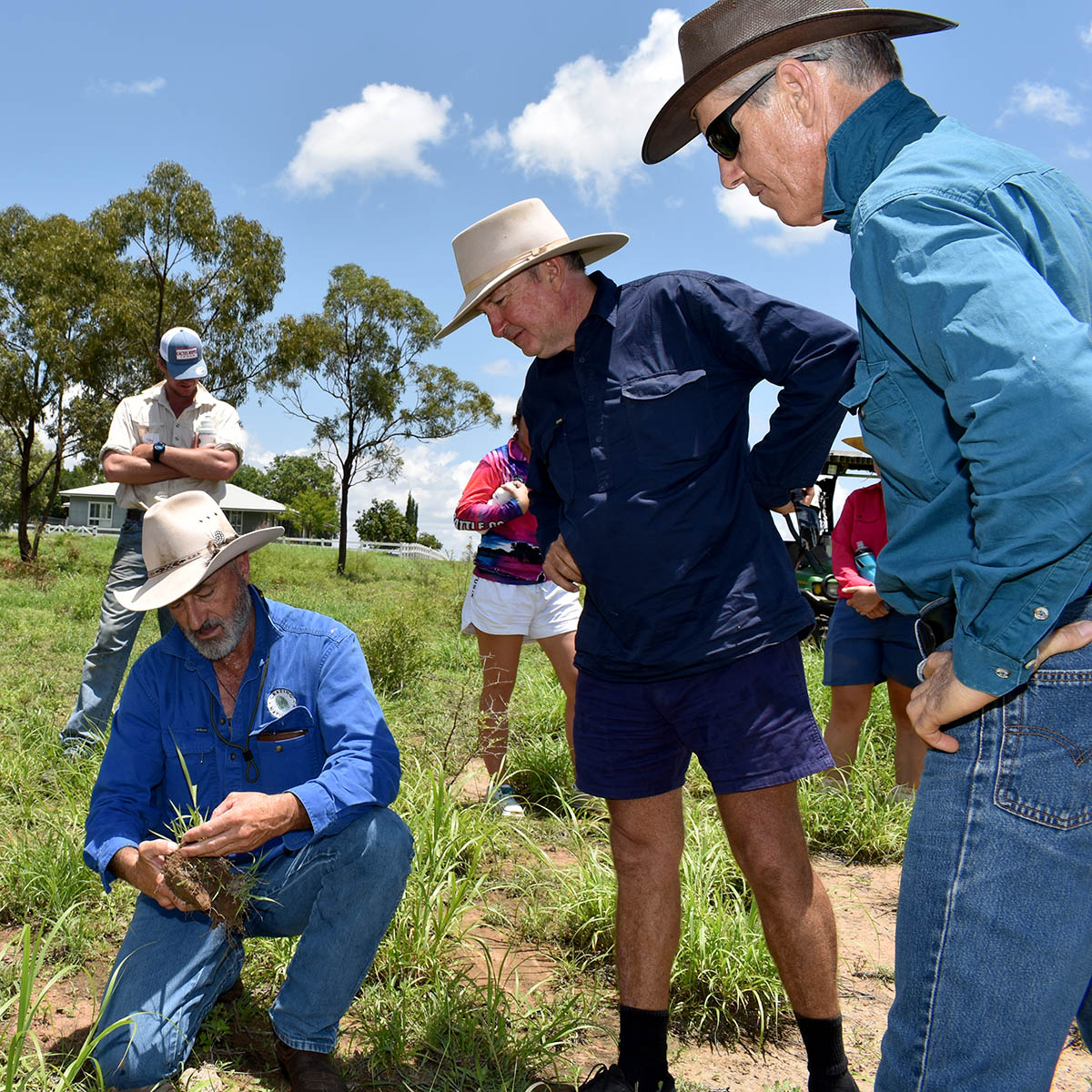 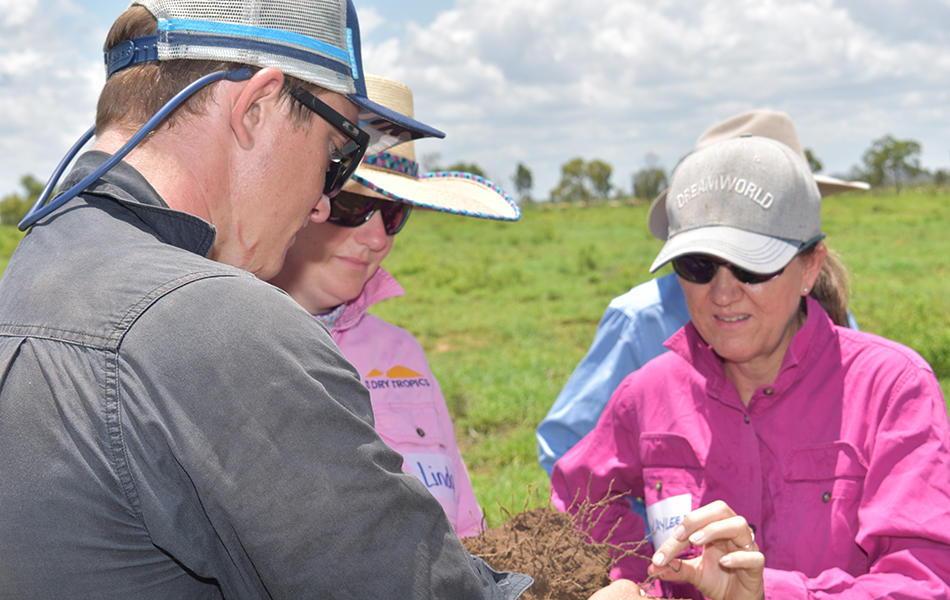 Checking out the sugar exudate in the roots of a grass plant are NQ Dry Tropics Senior Grazing Field Officer Linda Anderson (centre) and Warrawee Station graziers Will and Kayleen Healing. 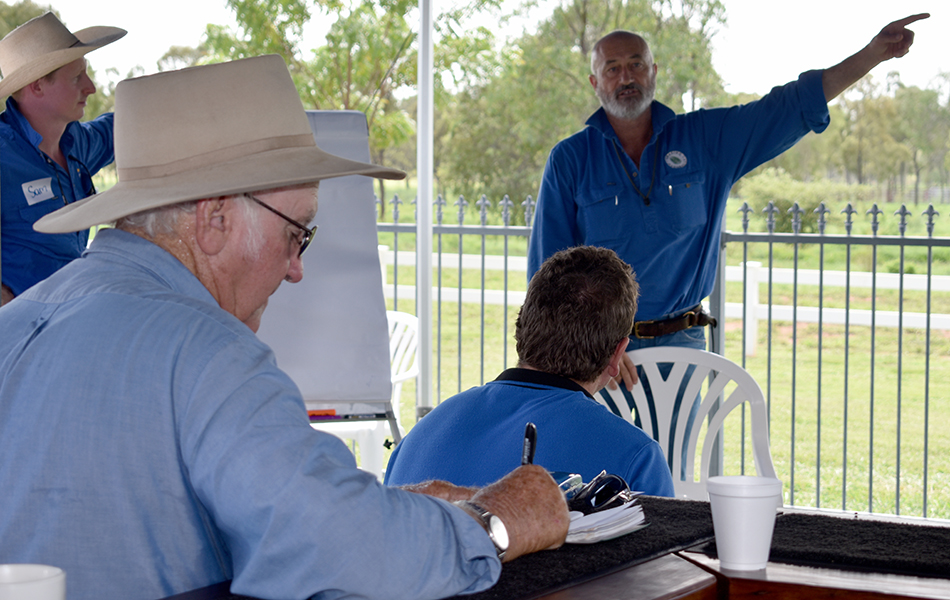 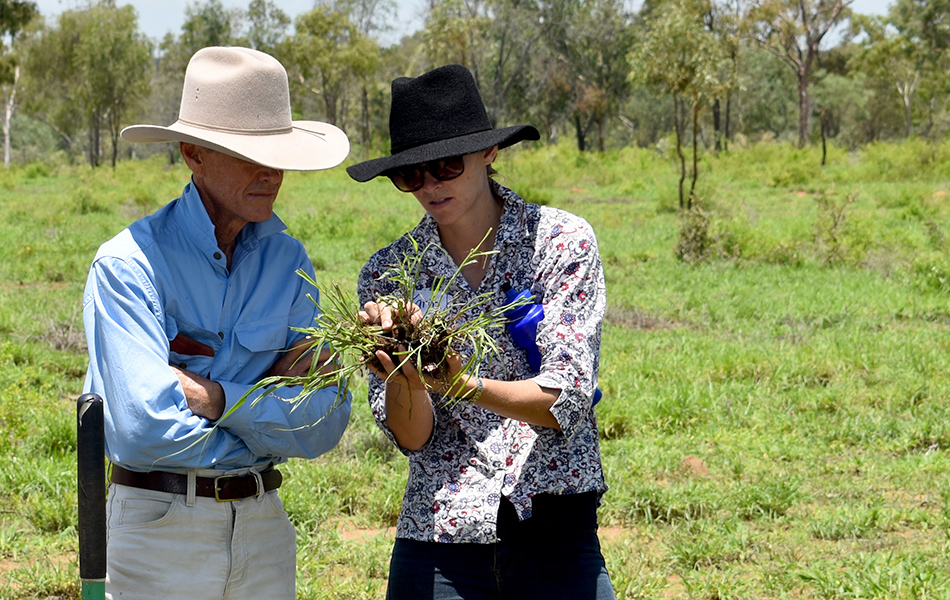 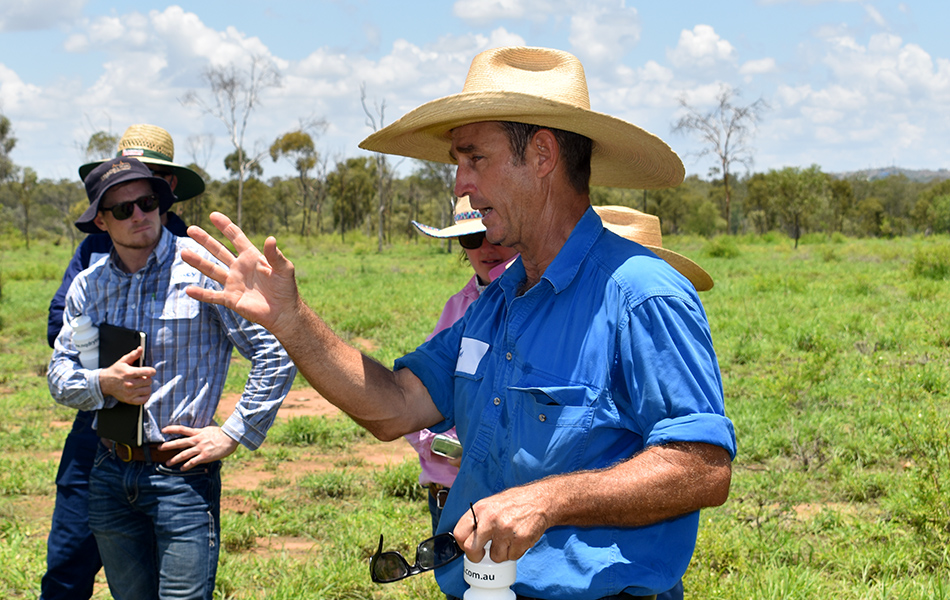 Dreghorn Station grazier Eiren Smith explains his Dry Season grazing plan at Dreghorn on the second way of the workshop.

AN enthusiastic “mob” of North Queensland graziers is gaining an appreciation of the power of peer-to-peer support as they adopt new grazing and pasture management practices on their properties.

Two groups of graziers at staggered stages of their journey towards fit-for-purpose planned grazing, have provided different perspectives on seasonal planning and subsequent management of cattle and pasture at a two-day workshop.

These properties are geographically spread between Giru and Charters Towers, and include the Lyons family at Four Mile Station; the LeFeuvre families at Worona Station and St Margaret’s Creek; and the Whelan family at Bumbleginny Station.

Four other families are participating as part of the Reefwise Grazing of Burdekin Rangelands project.

Recently, the groups converged at Bumbleginny and Dreghorn Stations for a two-day intensive on closing out dry season plans and exploring options to properly use the productive growing season ahead.

Ms Anderson said the graziers in the Reefwise Grazing project were in the early stages of adapting traditional grazing management to a fit-for-purpose system, and hearing the experiences from members of the Regenerative Tools project was an opportunity to see a little bit of the “road ahead”.

Mr Skeat said the workshop benefited his more advanced graziers as it provided “fresh ears” and a chance to discuss different perspectives of managing cattle and pasture according to dry season plans.

“Thanks to funding from the Enhanced Extension Coordination project, NQ Dry Tropics can continue to support the use of Maia Grazing to help keep track of rainfall, pasture growth, pasture utilisation and planned herd shifts,” Mr Skeat said.

“So far, being able to use actual data recorded by Maia has allowed us to better manage utilisation of country, make sound decisions on buying and selling stock, and comparing and evaluating effectiveness of moving towards a fit-for-purpose grazing system.”

The group focused on each property in turn, discussing successes and missteps during the dry season. The experience was, at times, very personal, particularly as graziers recounted difficulties created for themselves when a judgement call turned out to be the wrong call.

Mr Lyons said he had gained “a whole lot” from the discussion after he gave a short summary of the Dry Season at his Majors Creek property.

“Everything Dick told us about creating a fit-for-purpose grazing system was completely upside down to everything I had ever done,” he said.

“Sometimes I think the hardest paddock to sort out is one in my head.”

Worona Station grazier Chris LeFeuvre said he felt while the first year of a changed grazing regime was important, the second year was even more so.

Kale and Karin Robinson recently purchased Pallamana Station south of Charters Towers, and were gradually implementing their new vision for the grazing business.

“Listening and learning from other graziers who are already changing how they graze their stock is absolutely the best way to learn. It’s been really good for us personally, really useful,” Kale said.

As the break of the wet season finally eventuated, the group spent considerable time discussing and planning how, where and when paddocks were to be grazed during the growing season, with a focus on being able to recalibrate and change grazing plans in response to herd size and seasonal progression.

Mr Whelan, host of the first day of the workshop, appreciated feedback from the group about how paddocks at Bumbleginny had responded to the previous season’s grazing regime.

He spoke about the dramatic effect he had observed by balancing the oil content in the Dry Season lick fed to his cattle.

The group also went into some depth discussing the appropriate stocking rate for his operation during the next few months when more rain might be expected.

“It’s been good to have everyone here, to have Dick and Sam on hand to do the hard calculations,” he said.

“I have picked up a lot of things and what’s great is I now know exactly how many cattle I need for the wet season ahead,” he said.

Mr Whelan was also able to impart his wisdom on his  innovative approach to internal fencing and watering points, which was particularly interesting to attendees.

While conditions on their coastal property were dramatically different from most of the other properties, Peter LeFeuvre said he picked up plenty to take away from the discussions. 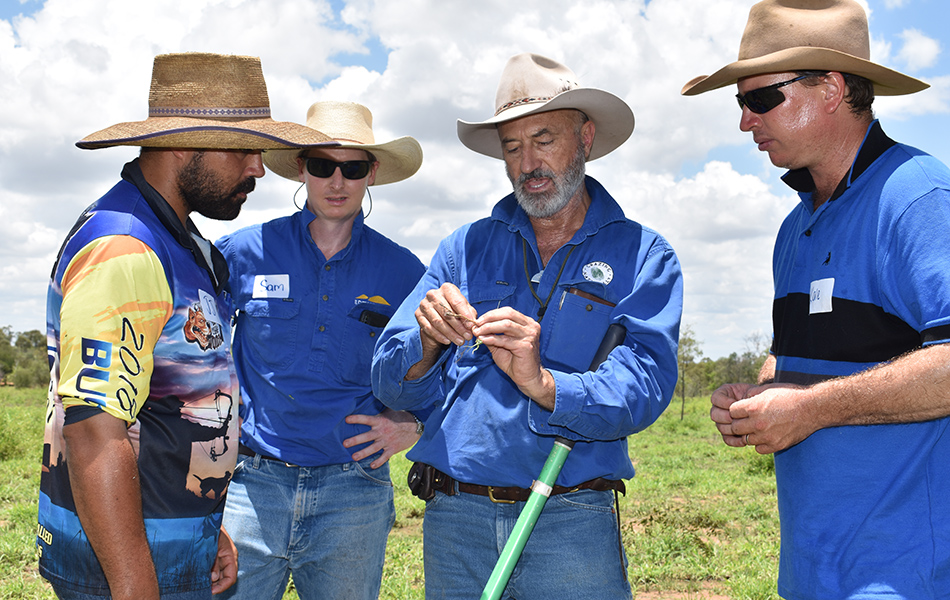 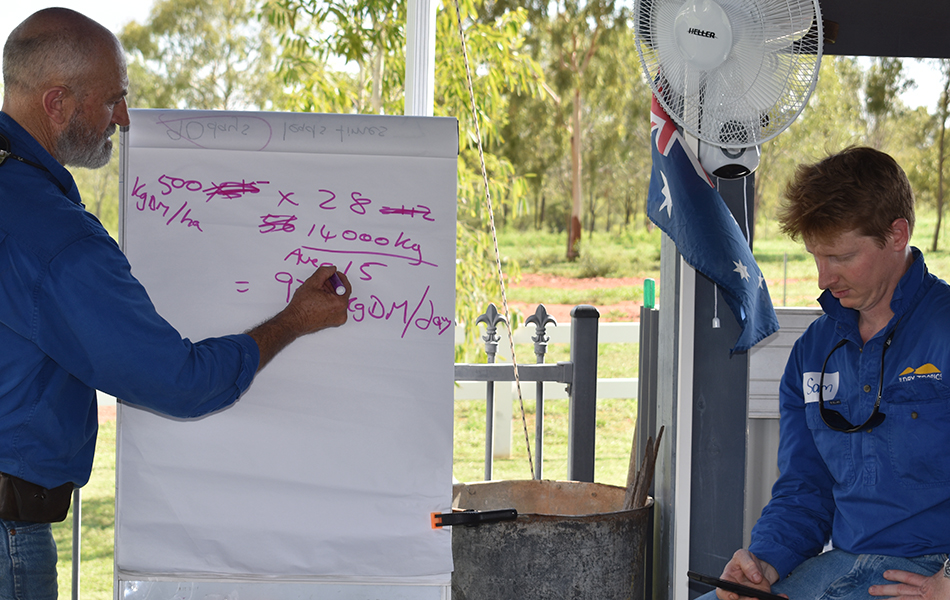