CASH flow, not calving rates should be the measure North Queensland graziers use to manage their breeding herds according to cattle veterinarian Dr Ian Braithwaite.

That was one of the key messages Dr Braithwaite delivered to graziers attending breeder management and pregnancy testing schools at Sutherland and Ewan Hills stations, in the Burdekin recently.

“The other two factors – the performance of breeders replacing sold animals and providing quality pastures that match stocking rate to carrying capacity – are important but will really feel the pinch if cash flow falls short.”

Attendees worked through breeder mob scenarios which highlighted how reproductively lazy animals in a mob encouraged managers to carry extra cows to build calving rates, with a subsequent detrimental impact on pastures.

The two-day workshop was rounded out with learning how to pregnancy test and determine foetal age.

“But that’s not the real power in these workshops,” she said.

“After the two days of training, graziers realise they get so much more value from the real-life, practical decisions that Ian teaches.

“They help power up businesses, production and pastures.”

The two courses, which attracted 27 participants from across the Burdekin region, were supported by the Queensland Government Landholders Driving Change project and the Reefwise Grazing of Burdekin Rangelands project, which is funded by the partnership between the Australian Government’s Reef Trust and the Great Barrier Reef Foundation.

Host of the Ewan Hills school, Ryan Jones, said the work to get cattle in and set up for the school was well worth it.

“I’ve now got a clearer picture about how I can set up my female mobs to get higher productivity, target supplementation and manage my grasses better,” he said.

“By far, this was the best course I’ve ever done.

“It rounded out my knowledge and gave me skills and management options to operate our business more profitably.” 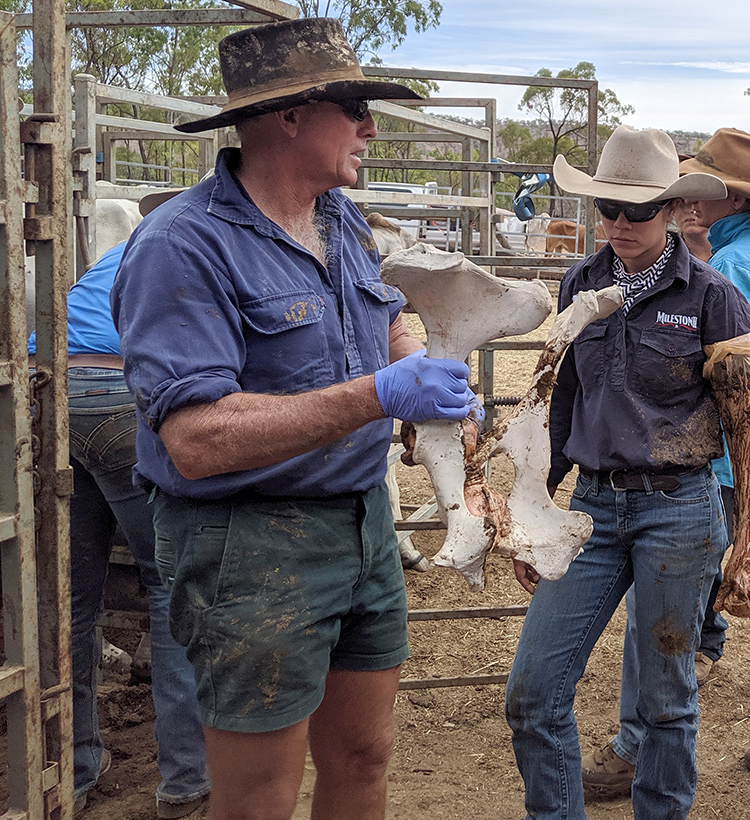 Dr Ian Braithwaite explains to to Kelsey Jones from Milestone Brahmans how to identify points in the anatomy of a cow during a pregnancy test.