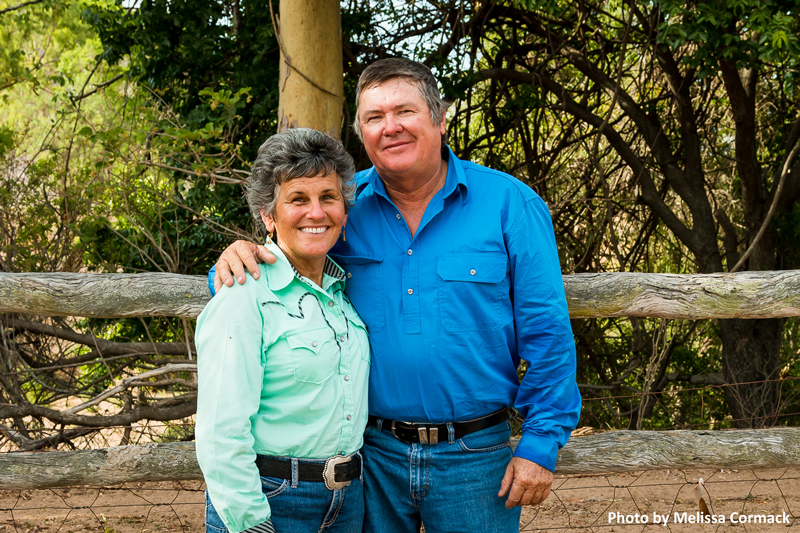 When her parents Tom and Karen first suggested consolidating their six breeding herds into a single mob of 2500 cows, grazier Nikki Murphy knew it wouldn’t be a simple task.

“I expected it to be a bit difficult to handle, but have since seen that there are lots of benefits,” she said.

Supported by NQ Dry Tropics, Tom and Karen Murphy, daughter Nikki and partner Harry Howard have steadily followed a programme of change on Tabletop Station, Collinsville, over the past 18 months.

Their journey began in 2014, when they undertook Holistic Management training as a part of the Queensland Government Regional NRM Investment Programme-funded Building Resilience in the Burdekin Grazing Industry project, alongside Shane and Amanda Watts of Sonoma and Barry and Leanne O’Sullivan of Glenalpine.

After completing their plan for Tabletop, they decided to create the 2,500-strong mob to give them more control over pasture recovery and to use old, rank grass which was being left behind by continuous grazing.

“The first challenge was getting the watering system up to scratch. We started equipping bores, and establishing cost-effective water storage and distribution,” said Tom.

The Murphys successfully applied for a grant to assist with the water infrastructure, through the NQ Dry Tropics Reef Water Quality Grants programme, funded through the Australian Government Reef Programme.

“Delivery volume is the key to watering a big mob, so it was important to have good storage capacity and at least a 63mm delivery capability to troughs,” said Tom.

“Having one lot of water to check, and taking dry season supplement to only one paddock, was a real time saver during the dry season,” he said.

During the dry season grazing programme, they moved the mob through smaller paddocks, and in larger paddocks they turned water on and off to manage stock movements.

“The higher stock numbers per grazed area utilised much more of the standing feed,” said Nikki.

Following a very average wet season in 2014-15, forage budgeting at the start of the dry season  indicated there was plenty of feed until early January 2016.

With a poor start to the wet this season, the single herd has again provided benefits, with most of the property being rested following first storms to allow pastures to respond to limited rainfall.

Tom has been a bit disappointed with the pasture recovery, particularly from the dominant Indian couch on the property’s black soil flats.

“It has been an unusual season, with a lot of low growing herbage germinating, but not much in the way of grass growth at this stage,” he said.

The Murphys have found that a drought reserve is essential, and the poor season last year meant they weren’t quite ready for the big changes they put in place.

“In the initial stages of changes, like we have implemented, you have to be prepared to sacrifice a bit of pasture to get the benefits of pasture recovery across the rest of the property,” he said.

The mob has recently moved to a well-grassed paddock for the next month in preparation for the new dry season grazing plan.

After experimenting with an electric fencing system last year, the breeding herd will be grazed in 40ha temporary paddocks across the property’s  black soil flats throughout the coming dry season.

The Building Resilience in the Burdekin Grazing Industry project, funded through the Queensland Government Regional NRM Investment Programme, aims to improve the economic, social and productive resilience of properties in the Burdekin region.