Stop shifting soils and water runoff at the source

Initial gully remediation efforts on a grazing property is already paying dividends for a Collinsville landholder.

Shane Watts, of Sonoma Station, had barely finished constructing four diversion banks on a 110 hectare catchment hotspot, when the heavens opened and dumped 150 ml of rain on the site in early March. The banks did their job – 100 per cent of the water remained on Mr Watts’ property.

“No water was lost. The banks were a success thanks to good planning and technical assistance,” Mr Watts said.

“Water was held up by the structures, and overflow water was returned into the landscape by way of spreaders situated at each end of the banks.

“Prior to the banks being constructed, runoff would see sediment suspended in the water and leave the property, go out onto the main road, run into Pelican Creek which eventually runs into the Burdekin River, then out to the Great Barrier Reef lagoon.

“Retained water is great for the landscape and good for the Reef,” he said.

Mr Watts said once the diversion banks were pegged out, construction was straightforward, cost and time-effective. All work was completed in seven days.

“Using a 27 tonne excavator and grader we cut the earth, cut the batter across the floor, ruled it up and then cut the top.

“The top is about as wide as the grader, about three metres, which gives the bank stability so that if cattle pad it, it doesn’t cut lines in it,” Mr Watts said.

About 750 metres of banks have been built, consisting of a series of four diversion banks situated about a kilometre apart, with the deepest one being three metres.  Banks have been seeded with a mix of silt sorghum, legumes and native grasses.

The ridges situated behind the diversion banks have been keylined plowed.  The keyline plowing pattern follows the contour across the landscape, creating a water flow system to move water from wet to dry areas. 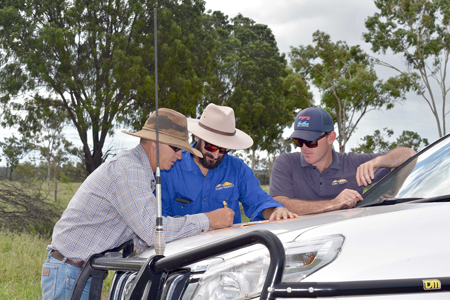 “The work that has been completed on Sonoma Station is an excellent example about what graziers can do to make a gully productive again,” Mr Smith said.

“The main benefit is that we’ve stopped water running down a gully and therefore have stopped sediment going into the Great Barrier Reef.  We have also turned unproductive land into a productive landscape.

“The work will be used as a site for showcasing and trialling innovative techniques, to facilitate engagement with local landholders,“ Mr Smith said.