Local landcare community groups and students from Shalom Christian College in Townsville recently took to the Ross River to learn about the invasive water weed sagittaria, its impacts and how to record sightings to limit its spread. 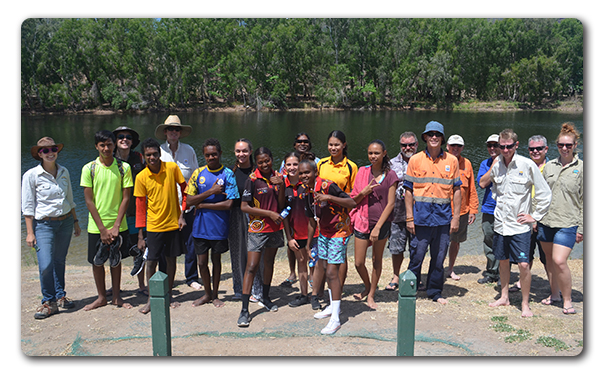 Like many water weeds, sagittaria was first an ornamental plant that escaped from water gardens and aquariums. It was first sighted in Brisbane and the noxious weed has since infiltrated waterways around Australia, including the Townsville and Burdekin regions.

“Recognised as a Weed of National Significance for its level of impact and ability to rapidly spread, sagittaria has been a problem weed in the Ross River for a number of years, and we have been keeping a close eye on outbreaks through regular water monitoring,” said NQ Dry Tropics Regional Pest Management Senior Project Officer Byron Kearns.

At the sagittaria training event on October 19, students and landcare group members worked together to positively identify and record the locations of sagittaria outbreaks within the Ross River; collecting valuable information that will be entered into the Regional Weed Database for analysis and to assist with control efforts by council.

“Sagittaria is particularly difficult to eradicate because it can spread under water and reproduce very quickly,” Mr Kearns said.

“It’s incredibly important that we know about these infestations of sagittaria so we can continue to control it. If left to grow, it can cause irrigation channels and waterways to choke up, which has many adverse effects.”

Weed chokes restrict the flow of water and increase the trapping of silt, negatively impacting biodiversity and preventing the use of waterways for recreational activities, such as boating, swimming or fishing.

The sagittaria training event also had an important role to play in educating members of the community, particularly the Shalom Christian College students who were involved in the monitoring activities.

“We come here [around Loam Island in Kelso] to go swimming. Now we know about this stuff and the other weeds, we’ll be able to spot it and call the council,” Shalom student Gail Coolburra said.

“This is serious stuff. We should all pull together to protect our native plants and wildlife.”

Mr Kearns was pleased with the collaborative efforts of attendees:
“Having these groups and students out here doing the identification and monitoring was wonderful – they have really made a difference.”