It takes more than a severe tropical cyclone to deter the dedicated volunteers of the Queens Beach Action Group (QBAG) from looking after Bowen’s longest beach.

Despite Debbie’s best efforts, QBAG recently completed a project on time to restore native habitat and protect eroding dunes at Yasso Point on Queens Beach in Bowen. And the group will have an opportunity to present its work to experts at the Coastal Conference in Airlie Beach this Wednesday 6 September.

The $11,000 project was made possible thanks to an NQ Dry Tropics 2016-17 Community Landcare Grant, supported through funding from the Australian Government’s National Landcare Programme.

QBAG founding member, Ivan Garrod said the group recognised that the dunes at Yasso Point were eroding away, and took action to protect them by planting trees in the dunes, and placing environmentally-friendly groins consisting of palm fronds on the beach.

Mr Garrod said: “I got the idea to place palm fronds from the former Beach Protection Authority. When one of the dunes had blown out, we placed palm fronds in the gap and covered them partially with sand. We let the wind do the rest until they were completely covered with sand, and then we placed more palm fronds again.

“The prevailing oceanic current (longshore drift) is carrying sand to build the foredune up, and the beach is already up to two feet higher.”

Understandably, work was put on hold during and after Cyclone Debbie while Bowen residents scrambled to get their lives back in order and make their homes livable again.

Mr Garrod said: “Due to healthy native trees planted and maintained by QBAG, and luck with the cyclonic wind directions, the site damage was reduced to dead branches on the historical banyan figs.”

Once the dust had settled, the volunteers were able to remove all the dead branches and successfully revegetate the area with assistance from local residents, Townsville Women’s Correctional Centre and Whitsunday Regional Council. 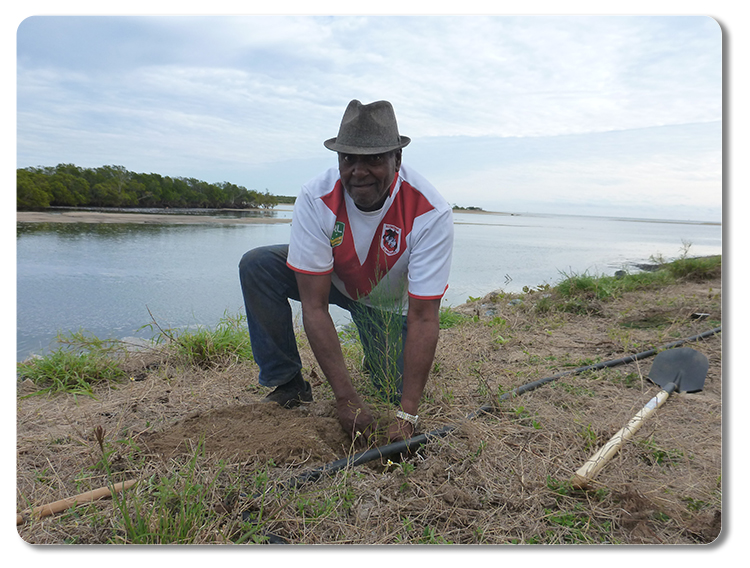 NQ Dry Tropics Project Officer, Thijs Krugers said “QBAG did a fantastic job, even when faced with the destructive forces of Tropical Cyclone Debbie. It is great to see how our Community Landcare Grants program is supporting important work to look after our coastlines, which help protect us from flooding by providing a physical barrier from the sea.”

The 2016-17 NQ Dry Tropics Community Landcare Grants program awarded over $111,000 to 13 community group projects to manage different threats to waterways, wetlands and coasts in the Burdekin Dry Tropics region over the last year. Visit the NQ Dry Tropics website at  www.nqdrytropics.com.au/community-landcare-grants/ for more details about the grants.