The bus tour was organised by the Lower Burdekin Wetland Steering Committee, which includes representatives from NQ Dry Tropics.

NQ Dry Tropics Project Officer Thijs Krugers explained that the theme of this year’s World Wetlands Day is “Wetlands for Disaster Risk Reduction,” which highlights how wetlands can provide a natural buffer for communities at risk of natural hazards such as flooding caused by cyclones or tsunamis.

“Wetlands can take the strain when flooding occurs by soaking up large amounts of water before they can damage coastal communities”, he said.

“Wetlands also act as nature’s kidneys, filtering out toxins and sediment, and are crucial to the health of the Great Barrier Reef.

“Unfortunately, wetlands are often viewed as wasteland, and more than 64 per cent of the world’s wetlands have disappeared since 1900. World Wetlands Day is an annual opportunity to raise public awareness and promote the value of wetlands”, he said.

Thijs added that wetlands also serve as recreation and leisure hotspots, especially in Townsville, with areas such as the Ross River, Ross Creek, and the Town Common providing scenic views and habitats for fishing, birdwatching, boating, and swimming. 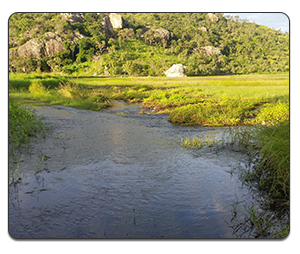 “To protect and preserve these important natural habitats, NQ Dry Tropics has initiated a number of community-based projects over the last few years,” he said.

“We have a very effective community-based weed control programme to reduce the amount of invasive species in our wetlands, but we’re always looking for people who want to get involved.

“Townsville locals are invited to celebrate and learn about our wetlands for World Wetlands Day on 4 February at 4:30pm at Rowes Bay Sustainability Centre, Pallarenda.”