The improvements Burdekin Delta canefarmer Mark Castelanelli is making to the family’s 400-plus hectare farm in the name of increasing productivity are as constant as they are varied. By drawing on the knowledge and science available and using grants to add further weight to his on-farm investments, the second-generation farmer is embracing practice change as a way to boost business efficiency while reducing environmental impacts.

Born and bred in the Burdekin, Mark went straight from school to working on the family’s 77 hectare Maidavale farm. By the time he had taken over full-time manangement of the property in 1985 from father Joe, the farm was 157 hectares – it now it sits at 415 hectares, with average farm production increasing annually.

Mark now runs the enterprise with his 32-year-old son Andrew – who also operates and manages their harvesting operation – and a single worker, so they rely heavily on finding efficiencies to keep the business as productive as possible.

“You can either stagnate, or move with the times,” the 62-year-old says, who recycles 80 per cent of the farm’s run-off to irrigate 84 hectares, and has started electromagnetic (EM) mapping the farm to identify areas of high salinity for variable rate gypsum application. Mark’s spray and fertiliser equipment is fitted with GPS guidance and rate controllers for accurate product application and record keeping, and his future plans include adopting automation within his irrigation management.

Mark has also put his nutrient application under the microscope for the past two years, taking part in the NQ Dry Tropics Sugar Innovations Programme – Enhanced Efficiency Fertiliser trial with the aim to reduce nitrogen inputs, while maintaining production. Results from the 2015 harvest season showed no difference in productivity, the outcome giving Mark the confidence to reduce his nitrogen application over the entire farm.

“I’m averaging about 200-210kg N/ha across the farm, and aiming for an average reduction of 20kg per hectare,” Mark says. “Some of the applications I’ll be doing this year will be down to 160kg N/ha, but only on specific blocks. My nitrogen application will be driven by my cane varieties and crop class, which is better practice than applying the same amount across the whole crop and then losing it to drainage.”

Mark’s approach has been assisted by the support of the Reef Trust Tender – Burdekin – a project that was launched last year by the Australian Government and delivered through not-for-profit NRM organisation NQ Dry Tropics. 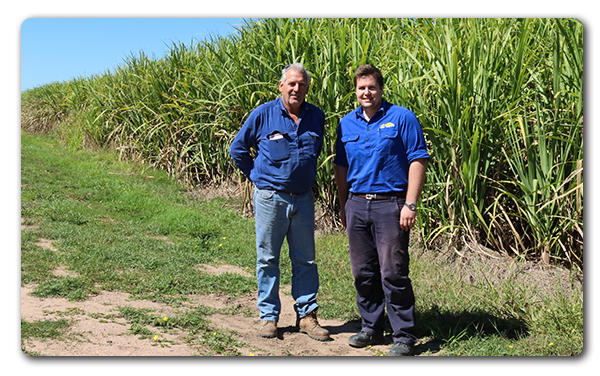 “I was mindful that I wanted to reduce my nitrogen application, but the [Reef Trust] tender made it more attractive as a business decision and it has given us the ability to make positive changes,” Mark says, who drew on support from NQ Dry Tropics and project partners to talk-through and help him complete the online reverse tender process.

“We are spending the money on a real problem block, making six blocks into one, taking advantage of slopes and making drills longer; which is all about optimising our farm and making it more efficient – this money gives us the potential to make this change.

“We have already invested a lot of effort into improving irrigation and enhancing our farm layout over the past few years. Weed management and irrigation are critical – when you get those things right, then fertiliser isn’t the one fix, but is an important part of the mix.

“I’ve got confidence in the choices that we’ve made in terms of our cane and reducing nitrogen. I’d encourage other farmers to look at it, and I think the tender provides a great opportunity.”

The Australian Government has committed to delivering a further competitive tender under the next phase of Reef Trust investment.